Nong’s house ain’t so bad. Not so Amy bugs, quiet, though did wake up to the sound of scratching scrabbling under the bungalow. I put my head out of the door to see daybreak with the mist on the mountains. Then back to bed to sleep off a hangover.

The previous evening was quite fun. Back at bert’s bar, Thai reggae on, and some German travellers, smoking and drinking and playing backgammon.

This morning learn some of bert’s stories. His mum is a nurse and discovered he was using Charlie on ko pegnan in fact had a habit. She made him do a urine test and sent him to a drying out clinic for 6 months. Turns out his dad is a cop ! H has many stories of corruption and drugs busts. Another of his stories involves his rayban sunglasses which were stolen along with his phone from his unconscious body at the scene of a motorbike smash. He says he amnesia for 2 months.

I take a walk along the other side of the river at the base of the cliffs. Looking for the local temple, which I think I discover. It has a gate with a sign and a guy dozing in a hammock nearby. I ask him if this is the way, but we don’t understand each other what I think is the temple is a room with a. Breakfast bar, a tv, a lot of Buddhist statues. No people, but a lot of removed flip flops. It could be some kind of local temple. I have no idea. It is where I was told it should be, and as I walk further nothing else materialises . I walk through some bush land full of big colourful butterflies and reach the river. Consider whether to wade across. It looks possible but I wimp out. 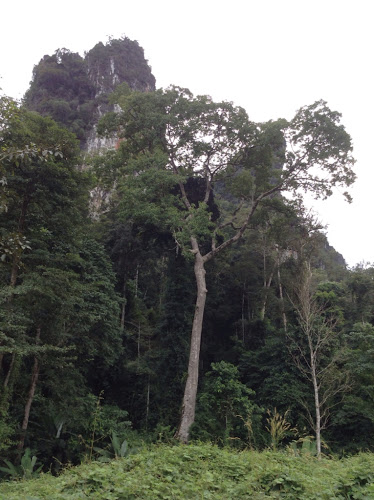