Trying to get all this down.Blog is becoming out of date owing to business spending time with people, no electricity, no Internet combinations.

Ingo and I rented a couple of motorbikes, as did Elizabeth and klaus, and even though we weren’t travelling together we kept catching up and bumping into each other on the same road. We were trying to get to the dam on the lake. The only accessible point by road. We. Discovered this as we tried in. Vain to cut through the jungle, only to keep looking back onto the main road. The ride. Was great, lovely winding road through the mountains with not too much traffic. We made a coupleofentertaining roadside stops meeting very friendly locals with no more than acoupleofwords in English. At. The roadside fruit stall a ladywantedto pose clutching a bunch of huge green legume looking thingsthenwantedmeto photograph her friend’s dour and dumpy little girl, who kept. Her thumb in her mouth the shoe time. We stopped late rattle phanom junction where therewasalarge temple. Though it itselfwasntopenwewitnesseda funeral gathering behind it andafodand clothes. Market where we bought some juice.

After passing a checkpoint where ingo was asked to put his impossibly small helmet (broken) over his huge thick dreads. As if it would save his life….we rode a bit further and finally got to the dam and the viewpoint above which gave a vast panorama of the lake and surroundings.hereelizabethand klaus found us once more and we decided to do a boat trip together. It wasn’t exactly cheap but it was a. Good 2 hours of. Speeding and drifting past limestone outcrops, drowned trees. The lake is artificial with the dam only having been built in 1982. The lake was beautiful, but thefactthat it was man made irked a little.ididnt swim. With the others, fearing deep water, but it looked fun..they swam out for the boat and around a limestone mountain, ingo climbing into a small cave. The sun was beginning to set as we returned and the water looked shimmery and metallic. Beautiful. 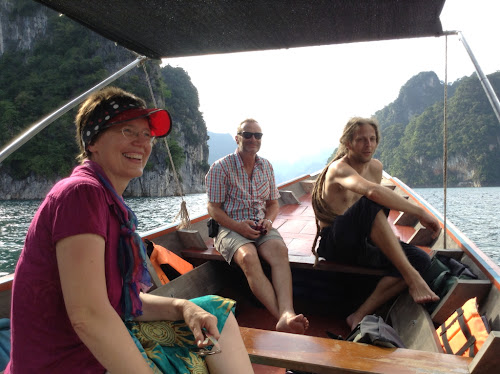 The ride back involved a lengthy stop over. A the market again, where things were in in full swing. Fried bugs which ingo tried, a bingo tent,and a concert, which we were denied entry to by some security guards who tried hard to make us buy tickets. There was a stall selling very tacky holographic pictures of Buddhist and royal themes. I was tempted, but didn’t buy,ingo did. The ride from there was in darkness and the road was a bit hairy, unlit in most places, broken hard shoulder and. My back light wasn’t working. My workaround of suspending my torch from my back worked well, as after that passing pickups gave me a wider berth.

Oh, I forgot. On the way out we also came across the temple that I didn’t find the day before! 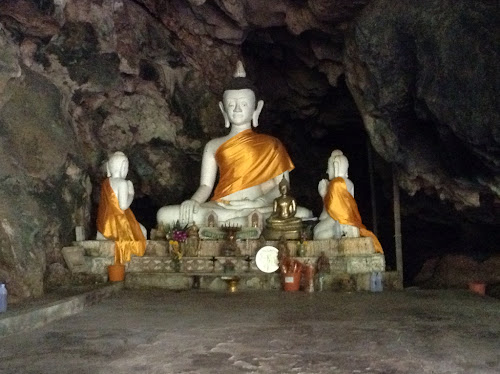