Today I went to peter’s school, which I would never have found had Kaye, 27, a volunteer administrator not taken me there. Amidst the back streets behind the hospital, in a poor Burmese area on the due of town. The school is a concrete building with 3 teaching rooms, a library of very soiled second hand or hand me down books, each room giving onto the next, no doors. To the rear is a long area that serves as a kitchen, and where lined up are small plates of fish in sauce, the students’ lunch. On entering the building I find myself in a class, and also there is a long table which seems to serve as an admin desk. His is where Kaye works. Peters class numbers 16 and the students are an even mix of 17- 21 year olds. The boys mostly wearing longyis. They converse amongst themselves in English. Peter is rather paternal in manner and the students are called in turn to stand and address the class. They seem confident, expressive and imaginative, and are not fazed by my initial presence. Brian is another post 60 year old Ozzie and has a lower level class. He is doing a rather clumsy and pointless exercise in following instructions. A drawing dictation which doesn’t really go anywhere. I place my finished cup of tea on a flappy table chair top and it slides of crashing and smashing on the floor. How embarrassing, but nobody is perturbed. Peters lesson is about creative story writing, involves drama, characterisation etc. he doesn’t frame it very well, and the students that I talked to wre not entirely sure what it entailed. They act these out hen he gives them a similar task for homework. There are no language aims, but the fun element is there and the students seem quite content. I spend some time with Brian’s class and never have I sweated so much in a lesson, my salmon shirt is dark with perspiration.They are invitee ro ask me questions. you would expect them to ask the standard ones like : are you married? whats ypur name? but the first one was from a little boy with short hair, white shirt and purple longyi whi asks me “are you sort or long? ” he is talking about height…! what a strange opening gambit…anyway i explain that or a european im not veryfall. i ask him how tall he is and he replies “5 inches”! i ask him to to stand up. obviously he means 5 feet. interesting how the burmese use feet and inches.I discuss with them where I’m from. Their world geography is unsurprisingly minuscule. They know I’m a native speaker but they are guessing I’m from Spain. They think paris is a country in the uk etc…..

After break I talk at length with Kaye and learn about his life here. He is studying psychology at university, but finds it tough going. Critical thinking is a challenge, so too are very new and difficult concepts. He has been here for 7 years as a refugee. Most refugees have I’d cards issued by he Thai authorities and are restricted to the Mae sot area. There are immigration road blocks. In fact I encountered one on the way in. He is able to travel all of Thailand if he wishes. He tells me more about the cage, where he was once locked up, for not having his papers with him. There is no food provided there. He bailed himself out with 6000 baht. Twice a week the detainees are transported by boat back to Burma, and many of them just keep coming back. It’s like a yo yo. I learn from him about the Chinese food aid. This happens once a year. A few years ago it was so hectic that a baby died in the crush. There is also a yearly Muslim aid hand out too. I hear about the occasional antagonisms between local and Burmese workers and sporadic killings off migrant workers and hushed up burials. I tell him about my experiences in Burma and he acknowledges the inequality of the society, the self- interested power borking, the useless and corrupt police. 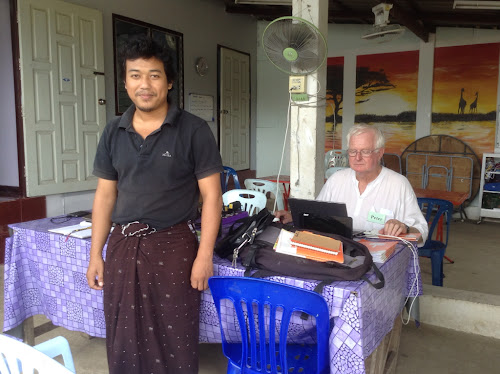 Brian’s second class is about business and trade. He models a transaction and introduces vocabulary in the context of trading mangoes for chickens. Interesting that when role playing the kids do not have much desire to make profits…..

At lunchtime the classroom is cleared out and 2 tables positioned for the 3 teachers, Kaye and myself. There are 3 simple dishes and rice prepared for the staff by the administrators and a student. We sit and eat,the students mill around the other rooms and eat their fish.

After lunch I circulate with my bags of longans and mangosteens, and sit with a group of boys and chat about English football. They ask my views on Alex ferguson, and why Liverpool and man utd hate each other. I get a a group photo then begin to show them pics of Brighton, not conscious that I’m cutting into their next lesson!

I make a gracious farewell and depart, getting lost on the way. It was nice being in a school where nobody is feeling under pressure to learn, where the mood is so relaxed, where the students are so open and smiley. I’m not sure about the methodology nor the language content. It’s all how I imagined an expat volunteer school to be. But, these students are producing English, are motivated and its a nice environment. 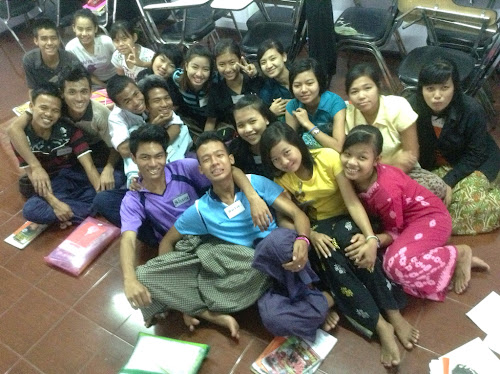 Cycling back I come across the end of Friday prayers at the mosque. Many cultures here, many religions! I’m now going to get out of my sweat soaked clothes, relax, then probably hit the sauna again. 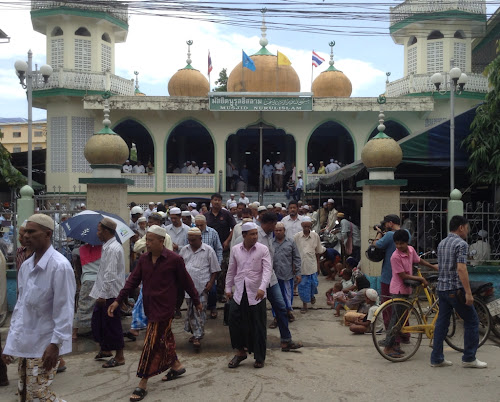 On the way to the sauna I buy another half kilo of longans. The stall holder mimes to me how to eat them…as if I don’t know already! I’m an experienced longan eater now!

There are already 2 guys in the sauna. One has many boils or similar all over his back. The other talks to me through the fog. He is a police officer with Chinese blood. He has two grown up kids,his wife has a banana stall. He asks me if I’m married. I hate that question actually. It’s expected of me robe married at my age….anyway he says see you tomorrow as he leaves. Soon after the big guy who I saw last time arrives. The one who rocked around flapping his arms. He speaks quite good English. He is Karen, has been in Thailand 45 years and doesn’t want to go back.he has a Thai wife and 2 kids. He Gets changed into his coloured sarong again and begins once more the same pacing, flapping routine. Although he has put some money in the box, I don’t think he goes in the sauna.

After 5 or 6 ins and outs from the steam room, I’m done, I take some photos and wander the temple grounds. Back to base, where the mosquitoes are active this evening.