Very interesting ride to the edge of town which took me across muddy tracks with streams, purple water flowers, huts standing in flood water. I see a 16 year old girl struggling with a cart full of plastic bottles collected to recycle, it’s an effort through the ruts and puddles. A Bangladeshi farmer ies me and ushers me into his muddy farm yard, full of ducks and hens and a shed which contains his prize asset…It’s this he wants me to photograph. Not him, not his 10 year old son in the traditional Islamic skull cap and silk tunic. It’s his fawn coloured bull. His prize. I oblige with the pic and I ascertain through gesture that he wants the picture. I use the iPad to write his phone number. His son types his name and his father’s and his small friend’s. quite a clash of technologies and cultures. The ol man with broken teeth standing in this primitive hovel typing on this device.

Further on I encounter youn boys herding cows across the fields, women with snacks in baskets balanced on their heads calling door to door at the water stricken houses. A stream where 2 mothers are scrubbing the laundry while their naked kids frolicking in the water. The sights go on and on, and these refugee encampments are literally a couple of minutes from the centre of town. Across the files are the golden domes of a mosque, a man with a white rice farmers hat is fishing next to his bicycle. Brooding grey clouds drift over the wall of corrugated iron shacks. It spits with rain and the call to prayer from this mosque and the one on the opposite side of this open space begins its call also. A different voice, a different tune. It’s like they are in competition. Why do people bother with religion when there life is as poor of this. What does Allah fix?

I hit a paved road that in comparison is a veritable highway and head away from town, past some pools where more boys are playing with a ball in the water, and back flipping in. God knows how dirty the water must be. On the banks of a stream is a little crooked cow herder of around 70 . He calls me over and we do another cow and owner shoot!

I’m unable to go much further up the road as it is flooded, the water being around 1,5 feet deep. Traffic is passing, including bikes, some even carrying several people, but I decide to stay dry. I dismount to watch the vehicles crossing and a guy on a scooter pulls up. Around 35, white vest, gold chain, a faint tattoo on his shoulder. He has stopped to chat. He is Burmese and now lives in Finland. Married with a Burmese. His teeth are red from betel. 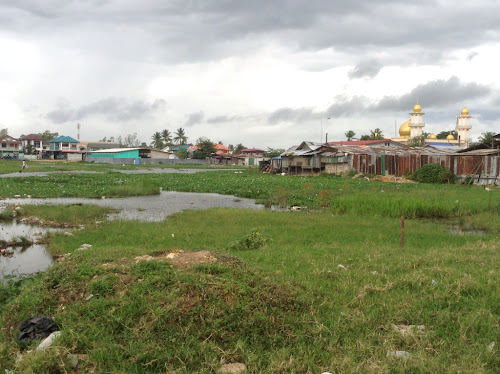 Back into town for a mint and pineapple smoothie. Strange how distant my life is from what I have seen. Strange how physically close it is.