Reached negombo by bus from Anuradhapura, a local bus described as semi luxury. I don’t really understand that definition. Maybe it was driven faster, maybe because I was able to take luggage with me. Regardless it was crowded with many people standing in the aisle, and hot and airless when crawling through the towns. I closed my eyes and absorbed the sounds and physical sensations. The whirl of the Diesel engine, the rush of the breeze through the open door at the front, the sway and swerve as it cut out then cut in around traffic invisible to me in the thick of the crowd. The bass heavy groove of singhalese dance music. When I shift to the windows seat I can lean out but the air is so hot and the sunlight scorching at midday. I see in the side mirror the face of a moustachioed brightly coloured shirted driver in whom I have trusted my safety.
Negombo is a busy road full of guesthouses and more upmarket hotels, occasional fake xmas trees festooned with lights, and flimsy nativity scenes. There are churches here too. My guest house has Xmas decorations, and a catholic shrine too. There are many options to stay. The first two I look at are dirty, smelly, unpleasant. The third is extravagant and costly. I settle for a family home stay guesthouse at the end of the row on the beach. A curious old woman with 4 teeth constantly milling around. I have at tv, not that I need it, but later watch highlights from yesterday’s premiership. The beach itself is grubby, firework debris and assorted packaging lie around, the tide leaving black rings on the sandy shore.almost immediately my attempt to chill out is disturbed by a hawker opening his bags of necklaces and carved elephants, spreading them out on the sand in front of me and refusing to understand the words ” I don’t want to buy anything”. He finally gets lost, disappointed. I do mangea. Read and a doze. A wind builds and I rouse myself just before sunset, the beach is busier and some groups of locals are playing cricket.
I managed to track down Dave and Donna finally. Having located their guesthouse and got through to the staff who barely spoke any English that I wanted to leave a message, we hol up in the evening to have dinner and beer, trade stories and compare tans.
Back at the guest house is talk to the boss, who calls himself Adrain and for the first time I meet a local who openly criticises the government. He complains about the scarcity and price of protein foods such as cheese and meat, laments the cost of attractions to and thus the negative imapct this has on tourism. He calls the president a war president and even compares his behaviour and publicity ( the images you see everywhere) to sadaam. His friends are in agreement. 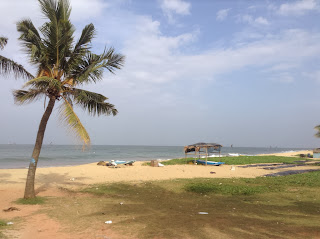