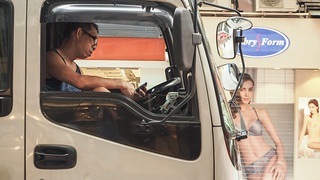 The rest of the afternoon played out slowly. I poked around the business district a bit. Glass, steel, designer brand names, gweilo faces. 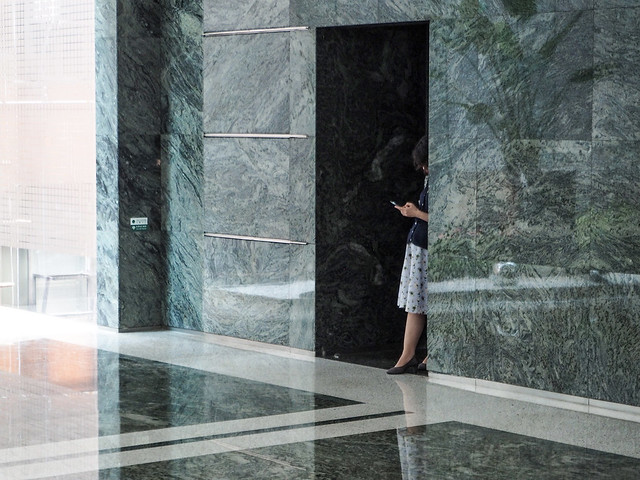 A world apart from the side alleys lined with old guys with stalls selling hand carved chops (personal seals). It would be cool to have one, but I’ve spent nearly all my money. I want to take the star ferry for a last time and cross to tsim Sha tsai, and sit among tourists watching boats cross the harbour. I feel a little empty and sadness is creeping. Having spent an hour there, I cross back with the ferry and pick up my bag at fortress hill. My timing is good and fortuitous, the airport bus stops in front of the hostel and takes me through high rise causeway bay, admiralty and centre before sweeping through the tunnel under the harbour, coming up in Kowloon, crossing 2 massive suspension bridges and onto Lantau and the airport. Here I meet Kk, who has taken several hours out of work to see me off. We eat at a Japanese fusion restaurant and I give him the weird Chinese combination lock I got in the antique market, and a dice to help him take risks and arrive at decisions! It’s quite an emotional goodbye. We have done a lot together in the last few months and it’s strange to bring it to a halt until we don’t know when. He videos me as a pass through immigration. It’s like his departure from Brighton -it’s only farewell till the next time. We will meet again soon. That’s for sure.

Yesterday was a day of wandering alone. It rained most of the day. I took the tram to its terminus in shau kei wan and explored the market. Rain blowing through the window at the front of the tram heading west again. Kids in all white uniforms leaving school. Late lunch of wonton soup in veg 6 which feels quite upmarket. Afternoon in wan chai, more market, pal Tai temple and watching football on a flooded bright green pitch.

Meet Kk at 5.45 at tsim Sha tsai. He’s had a hair cut and is very tired from working a 36 shift. We watch dusk from the star gallery and he gives me a gift from his grandfather’s coin collection. One from the time of emperor kanxi (300 years old), the other from the grandson’s era. What a nice sentimental and historical gift.

We meet tom for an Indian dinner at woodlands restaurant. Food isn’t bad. Tom talks a lot about politics. I’m tired and don’t take it all in.

Today is my last day. Kk is working so he’s going to meet me st the airport for a farewell dinner. I’ve spent the day revisiting a few areas, including central and soho. I had lunch at an overpriced health food cafe, then went back to the incense heavy air of man mo temple. Everything is more pricey, more international and faster here. This is the business zone. I browse the antique stalls near the temple and buy myself a souvenir and a gift for Kk. In case he’s reading I won’t divulge the details yet. I’m in a strange head space. Not excited about going back. Feel there is more to explore here. Feel like I’m leaving a part of me here.

A day of travel in various forms. Bus 100 to Guilin north station. 3 hour train journey to Guangzhou south, the city being shrouded by a heavy grey sky and electric storm, making it even more dystopian. A gamble that I can get to Guangzhou east in 2 hours and get on a train even though I haven’t booked in advance pays off, though is slightly stressful with 40 minutes of rammed underground trains, and disorientation at east station. I think my least favourite thing in China is trying to cope with these huge stations. Anyway I’m now on the Hong Kong train. Feels like I’m going home. Certainly I’m back in a “more developed” society. This means everyone is on their phone, looks tired, weary and is indifferent and unfriendly. I’ve come a long way in one day or so.

Here is some fruit from Guilin, forming most of my lunch.

3 more metros and after 9 hours of travel I’m back in Hong Kong at fortress hill again. This time I’m in the main hostel block and the room has more character and even a view. Vege buffet just around the corner 😀

All is not as progressive as the Chinese might have us believe. Close experience with infrastructure development reveals directionless unplanned mess. The road from yangshuo all the way to Guilin (40 miles) is torn up in readiness for a new and wider carriageway. Rather than doing it in sections the idea seems to be to smash up all of the road, leaving bumpy unsurfaced aggregate as the main road. It’s a dust bowl, chaotic, no markings, full of potholes, cars, trucks, buses, motorbikes, even a brave cyclist weaving in and out and seizing right of way from sounding their horns. Our bus bumped a truck. This didn’t even wake the guy in the mirrored shades sprawled in the seat behind me. Passengers flag down buses from rudimentary central reservations. The only work I see is manual labouring, cementing kerb stones together, and diggers smashing up Tarmac. There is very very little progress. The guy I met a few days ago on the Dazhai bus told me this is a normal state of affairs in China. We pass through towns which have been bulldozed leaving piles of rubble reassembling a battlefield. The journey takes an age.

Toilets. In my mind the standard of these says a lot about a civilisation. The Guilin bus station ones were horrendous. Squalid squat and shit holes with no privacy. Guys actually using them to do their business whilst playing games on their phones. The toilet at the temple yesterday was even worse. Basically an open gutter in a shed with no flushing facilities. Hold your breath.

Anyway I’m back in Guilin and I time to get to the temple restaurant for another wonderful buffet. I am also able to finally put in some less dirty clothes (having travelled very light to Dazhai and Xingping. At the lake there are various groups of people dancing to recorded music In the glow of the green and red illuminations. One set of folk are female and are practising Chinese classical dance, but not all on time. The others are dressed in black and do some rock and roll jiving then a rhumba. Here and there I catch line older men singing to themselves in the semi darkness by the shore. On the river are small illuminated rafts, each holds the silhouette of a man with a long pole and sitting beside him are 2 or 3 large birds. I summise these are cormorants and these are the fishermen who use them to catch their fish (the birds throats are restricted by a rope so they do not swallow any fish). But they don’t seem to be fishing. A strange thing is that whenever a pleasure boat passes, the guys lift a bird high on their poles. Why is this? To offer a pose for photos? But why do this? What could they gain from this?

A pitch black walk up very steep precarious steps aided by a flashlight took me to a dreamy view of fairy tale peaks and clouds. The only soul there for a while then joined by 2 other photographers to contemplate in awed silence. A great start to the day. Not much more to report as I prepare to leave and begin my slow return journey: Guilin: Guangzhou: HK: UK.

After breakfast with the Germans. I meet up with Echo who works at the hostel for our planned hike. First we have to get across the river li by ferry and the ferryman tries to charge me 5rmb when the local rate is 2. He doesn’t really have a leg to stand on when Echo has just paid 2, but still complains and argues for 10 minutes as we are waiting to depart. On the opposite bank we are met by her friend (and this girl’s friend, plus a puppy) who works in a guest house next to the limestone mountains, surrounded by a peaceful garden where they grow all their vegetables. She gives us a lift in an electric motorbike 3-wheeler with a flat bed trailer. It’s a very bumpy ride and we have to get out and push the flimsy vehicle out of a puddle. After dropping off our transport we begin the walk through farms and orchards of huge pomeloes, towel gourds, golden oranges (these smaller than a ping pong ball, green skin, orange flesh), past pig sties and chicken houses, farmers driving cows. It’s very local, slow and quiet on this side of the river. We are  hailed by younger girl of about 17 on a bicycle with her 3 year old brother. She tells us that they are making ginger toffee. This involves boiling up sugar and ginger to make a sticky paste which the gnarly old guy stretches and pulls and twists on a bench. It’s then pulled into strips and as it quickly hardens is snipped into bite size pieces by the family. They also make sweets from their own sesame seeds and peanuts. The walk is hot and eventually the path peters out in front of a sheer cliff face. In spite of Echo’s calls and reference pics sent to the colleague back at the hostel we cannot find the right way and have no choice but to descend. It’s amazing the little boy has made it this far completely willing and untiring, the only problem being his losing his tiny blue flipflop which keeps slipping off and needs to be retrieved. At the bottom we become 3 and adopt a backup plan which is to walk along the river to an evocative cave temple. The cave in question having no illumination save for 3 oil lights at an altar. My friends immediate reaction is to use the flashlight on their phones to guide them, but I insist we enter and acclimatise. It is so still and quiet in there. We take a rest and eat some noodles at Echo’s friend’s ghostly guesthouse then head back before 3 when I go to bed for a few hours. Exhausted from the head, and probably our exertions.

The old quarter, which consists of 4 streets, packs up early evening as the tourists have all gone home. The streets are returned to the residents. Loud shrieking kids running up and down. Families, doors open having dinner. Each house has a plain concrete or stone floor with the living room at the front, revealed through open wooden doors. Each contains simple low stools, a table and a huge tv. This is on in every house usually with the sound turned down. I guess it serves as wallpaper. Nobody is actually watching it. I’m glad the TVs are turned down. The chatter of countless TVs from open doors  would be hideous. Some houses  display a poster of Mao on their wall. Older people sit in the darkness on their front steps, bare chested men chat in hushed voices.

Around Asia with Andrew Wood
Blog at WordPress.com.