I’m on a big rock. In fact it’s a mass of enormous granite boulders which feel clumsily tumbled together by some giant. Trees twist In and out casting pools of shade. A small flat lizard with an orange head scampers by. This is called the 68 caves and all the gaps between these massive lumps. Were at one time hermitage meditation spots for monks.the view is extensive I am high up. But there is never silence. I can hear the old car horn honking of the ice cream seller and occasionally the wafting insidious annoy of the official at the mini tale site. The early after noon sun is hot, I’m drenched in sweat, a gentle breeze flows.
The minhitale site was a limb up a lot of stones it into the rock face. Apparently 1800 of them, but it felt less. Atthe enclosure at the top there are a number of peaks. The dagbola with more steps and a viewing platform that pilgrims ate queuing to access.an enormous white stupa,another peak with a plain white Buddha. It would be very calm and peaceful were it not for the described tan oh. I understand not a word, and the voice is staccato and dreary. These are not prayers.announcements of some sort.
It’s been a religious Christmas, at least in terms of the places I’ve been. Christmas afternoon was spent at the oldest tree in the world. A venerated 2000 year old boddi tree, a destination for barefoot white bedecked singhalese Buddhists and orange robed monks. There was a lot of groups praying together, chanting together, making flower offerings to the tree. I met a curious group of women, two nuns of some kind, in similar robes to the monks, sitting in the conversation hall peeling back the petals of lotus buds, dipping them in fresh water, preparing them for the pilgrims to leave at the alters. A parade is beginning led by small boys carrying cushions of white lotus flowers and elderly monks with yellow parasols, A long long roll of fabric, striped like prayer flags is unrolled and carried overhead by hundreds of pilgrims chanting satu satu sat. The procession is hundreds of metres long and winds around the tree, pilgrims jumping in and also clasping the flag, then leaves through the gate in the direction of another sacred site. The lotus women exchange addresses with me. This is becoming common. The following day an 11 year old boy gives me his number and tells me to call him. An old man at the parade asks me to send him photos. 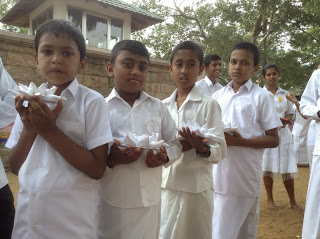 Now out of site I can hear military drummingand marching sounds. What is happening? Could it be something to do with the masses of young soldiers I saw lounging in the park before the car park to the mihintale site?
Back at the carpark I have. Fresh coconut and chat with a guide who agrees that the tourist charges to the sites in Sri Lanka are far too high. I roll down the hill and look for the place he tells me about, black water. I find this after climbing a path through a forest, past some monk houses cut into the rock and lifting some tree branches to pass under. I emerge in an area of ruins next to a water tank, the water deep, dark, reflecting the huge boulders and hills scattered around. On the other site is a little island with the ruins of a temple. It’s very peaceful, quiet, empty, perfect. A young boy in a black shirt calls out to me from a rock then runs after me and starts a rudimentary conversation. He takes my picture, then walks with me to introduce me to his mother who is sitting on a wall next to the reservoir. We chat and then his other 2 brothers and father appear. More talk. The boy wants to take lots of photos. The family are from Matara and invite me there next time I’m here.
The ride back into town is incident free. Everyone calls out hello to me, the odd white curio. This is a country where people still stop to watch train passing and kids wave at them.
At the guesthouse I learn from the owner that the bicycle mystery hs been solved and the missing bike, the one I borrowed 2 days ago, has returned. The story is complicated and it transpires that I did take someone else’s bike when I was at the gin shop. The story was put together by the guy working there. My bike sat unlocked abandoned at the store for 2 days, then was stolen by a junkie today. The shops CCTV, identified this guy, helped them retrieve the bike, them they worked out it was mine from older CCTV. The guy remembered that I had asked directions or my guest house, so they phoned them and the bike got returned. I’m amazed. I’m amazed that it hadn’t been stolen over 2 days, that they use CCTV here, but most of all that I did in fact screw up. I was swearing categorically that I couldn’t have taken the wrong bike. I was sure I was riding the same bike. Being lost that night clearly scrambled my brain. Alls well that ends well, I guess.