Actually as usual getting out of bkk is a headache and there never seems to be a simple way. The various mods of public transport are poorly linked, don’t get you where you want to go, and the roads are impassable most of the time. I get a boat down to thaksin bridge to pick up the sky train. This is actually going in the opposite direction from the one I need, but I figure it will be more relaxing, maybe Ben quicker, certainly cheaper than sitting in a taxi. After getting on a train that went the wrong way, in spite of the signage on the platform, I do get to mo chit station. With a name the same as the required bus station you would think they would be reasonably near. Not even within walking distance. A 20 minute bus ride away, but at least there was no fare…no conductor on the bus at all. Mo chit bus station is a sprawling and confused mess, and I need to go from one sides to the other,through a rabbit warren of market stalls, and end up at a terminal building of 3 floors. After asking at several counters I finally find the counter for nang rong. Whilst waiting I get a soup and end up chatting with a Thai woman with a young child. She has an Australian husband and is back in Thailand on a visa run and trying to get her daughter to Australia. I get the impression it’s a marriage of convenience. She gets a life for her daughter, he gets an obedient pretty woman. She’s is already saying she plans to go there only for around 5 years. I guess there is nothing wrong at all with this. I’m sure in faring marriages both parties know it isn’t real love. I wonder if its the same with gay marriages….from the Thai guys I have met, I can see that their are always ulterior motives. Take what you can get then thanks and see you.

Arrival in nang rong after 5 hours. It’s dark, quiet, the taxi drivers chatty but not pushy, and they leave me to my own devices, ie walking to honey inn. Along a busy main road. I miss the turning, make a call, and one of the women from the inn comes and gets me on a motorbike. At first I get the feeling she runs the place, yet the whole time I’m there the one who is always there, and cooking, cleaning, renting motorbikes, trying to make communication, is the cute 70 year old, or so I guess, grandmother.

Phanom rung. This is the place I’ve wanted to visit several times but its always seemed too far or too complicated.

Phanom rung is a Khmer temple the same style as Angkor wat and its on top of an extinct volcano surrounded by rustling bamboo trees. Hardly anyone there other Ghana plethora of young painters from khon kaen university at each corner of the site. The place is calm, spectacular, relaxing, with lily ponds and monstrous red dragon flies. It follows the layout of a long bridge with lotus bud columns. Climb a steep flight of steps flanked by the naga serpent. More steps takes you to the plateau where there are lily ponds, extensive view to probably Cambodia and a view straight through the main entrance which carries on past the central silhouetted linctum stone to the opposite door. This is bisected in the middle by an east to west passage that similarly passes through several doorways, dark to light to dark. The roofs are mainly intact and the central carved tower with scenes of Krishna and vishnu. Fortunately the day is cloudy and I’m not going to get burnt. Famous last words maybe… 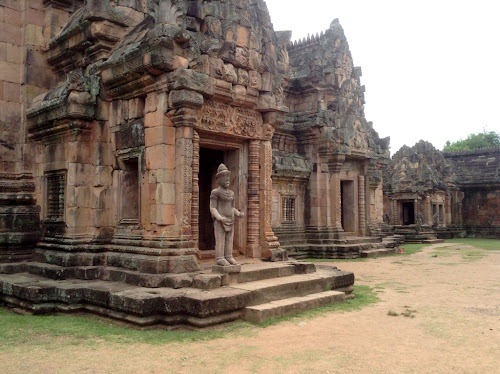 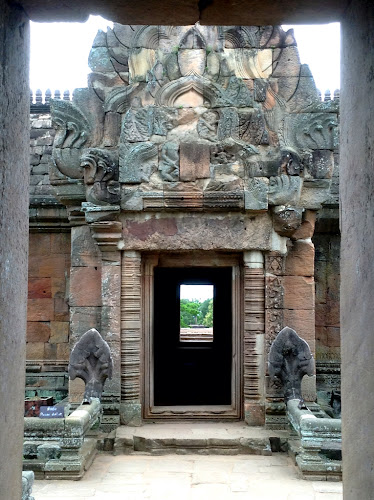 I carry on winding down the steep road to prasat meung tan, a Khmer sanctuary..impressively restored,the 4 l- shaped ponds with lilies buds are most enchanting 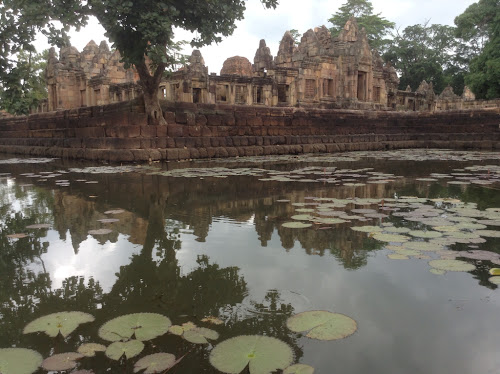 A posse of young school kids in blue shirts are sketching the ruins, many call out hello and how are you in English. I spend a meditative few hours here before a slightly uncomfortable ride back, the road now busy with trucks, overtaking each other willy nilly. I catch some glimpses of the rural life here. Old farmers wearing longyan with. Water buffalo crossing the roads, farmers planting paddies, wooden houses on stilts.

I decide to explore nong rung by motorbike. Not a lot here. The night market has a stall full of many new tropical fruits to me. The potato like one tastes of grapefruit. I get a banana pancake, recharge my phone and bump into Francois the French postman and his wife from reunion who are also staying at honey inn. I use my phrase book to point and show to manage to get a meat free pad thai, which is so so. 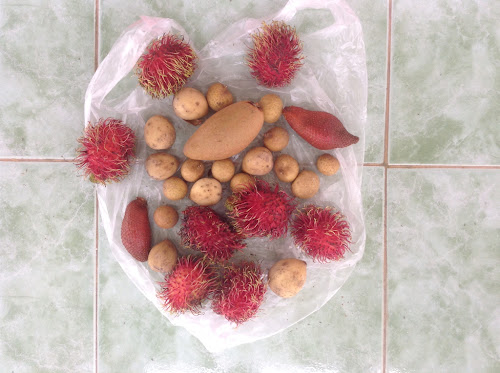