I’m back from 5 hours in Burma and it felt like a lifetime. Being in Mae Sot feels like the height of developed civilisation. The so-called friendship bridge is reached by following a long straight highway with trucks parked up along the sides. I initially don’t take the crossing and instead cruise the area under the bridge, the backside is all churned up and there is debris in the bushes from the recent 2 meter high flood waters. On the riverbank behind the concrete emabankment and behind a coil of barbed wire are a few makeshift stalls, the holders calling out to me offering their wares: Viagra, cigarettes, sectors. I’m guessing that they are in no man’s land behind the wire. On dry land is a covered market with many stalls selling finely carved Buddhas and teak furniture which young lads are polishing.

At the bridge I’m approached by a dark skinned guy with a scarred swelling on his neck. Not so skinny and quite smartly dressed in a shirt and long trousers. I’m immediately suspicious that he is a fake guide, working for the government in Burma. I’ve read about these guys. He shows me where I can park my bike and escorts me out of Thailand and onto the bridge where Burma looms. 300m away. He tells me he meets with foreigners to practise his English. Entering Burma is swift, I pass under a gazebo where some uniformed border agents are lounging around. I’m shown a tree stump which I believed to be where I should sit, but as I move to do so they all laugh at me. I was supposed to stand on it so they could frisk me. I’m ushered into an office then another by a series of well fed smiling white uniformed immigration officers, one of which welcomes me and asks for my 500 baht, which will go straight into the governments pocket. Heis civil, and I am fawning. They take my passport as guarantee that I will return and give me a laminated card with the number 3 printed on it to redeem it. I learn later in the whole day only 8 foreigners have crossed here.

Once off the bridge I’m in the town centre. A main drag not unlike poor Thailand. With food stalls and various uniformed figures sitting around. The side streets are unpaved, muddy, under water, the houses wooden shacks on stilts. My escort is called Mike and I attempt to suss him out by pushing him to talk about the government, police, religion. I realise he is genuine. He doesn’t have faith in the police, and tells me at length how they failed to get back his stolen motorbike even though he had identified the thief. He is critical of the army, the government. Laments the inequality in society, but forever remains optimistic. I ask him if he is afraid about speaking out. We sit on the polished teak floor of the pray hall at the pagoda and I wonder if anyone is overhearing our conversation. He says he is not afraid and not worried. I discover later that this is not entirely true. He deplores the medical service in Burma. His 18 month old son died recently as a result of disease caused by the flood. Later he shows me his picture. He also lost his brother in law recently too. Liver failure. Alcohol.

The pagoda is lively, kids playing and running through. Like all these poor places, it is opulent and a very stark contrast to the hovels that most people are used to. Mike takes me to his house. The roads are mud and puddles, shacks that serve as shops, barber shops, phone call centres. It’s very much third world. His house is on stilts, rattan sheet walls, very thin, plastic mats on the floor, it is squalid and I feel slightly ill at ease inside. There a no chairs, no tables, no kitchen, no bathroom. There is a tv, and electricity which is hooked up from a neighbouring rich house which is kind of like an electricity hub. There are kids playing in the mud outside, chickens running around, a pig snorting in a cage. The path is sandbags. His house too was deluged by the recent flood water. He shows me a book that has passed through many many hands. An Oxfam guide to health in a place where there is no doctor. It describes among other things how to deliver a baby. He tells me malaria is a problem here and how he has had it. 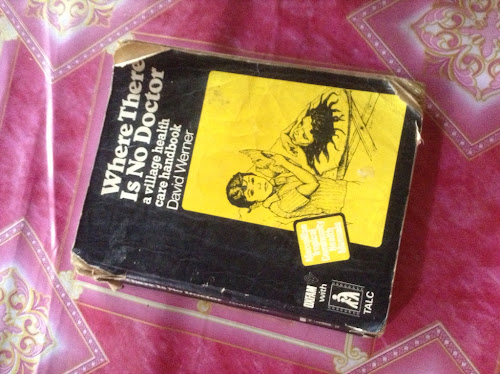 His young kids arrive then disappear again, left to their own devices, at 9 and 5. no school today. 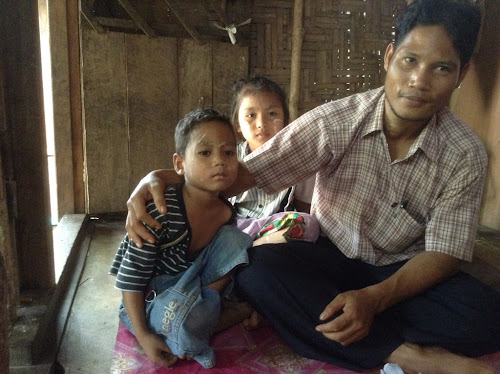 I need a pee, but am wary to ask, as there doesn’t look like there is anywhere. He says he will take me to a friend’s house where I can relieve myself. This turns out to be a sort of cafe…some benches, a table a fridge, some young guys, one a transsexual, I later learn, sitting around bored looking, smiling, passing an unrelenting nothingness of existence. I use the toilet, I drink some water. Mike talks a lot. He is quite repetitive and is becoming a bit boring. His English isn’t so easy to follow and typically he doesn’t listen or ask questions. Still I am very grateful to him. He has no job, and lives hand to mouth. He has shown me things I would not have had the courage to explore myself. Back on the road we have some betel nut rolled in a leaf, given free by the stall holder. It’s bitter, crunchy, a bit aromatic, chewing it supposedly cleanses the mouth. It produces red juice, which a user spits periodically. This stuff turns your tongue red and blackens your teeth with extended use. I saw many cases of this. The people are gracious, not shy to having their photo taken. A couple of oddballs walk up to me and welcome me. One guy is wearing a pith helmet has a long beard and is carrying a plastic toy machine gun.

We take lunch near the bridge. Numerous dishes all very tasty: mushrooms, bamboo shoots, a bitter green vegetable, rice and a pile of assorted leaves. 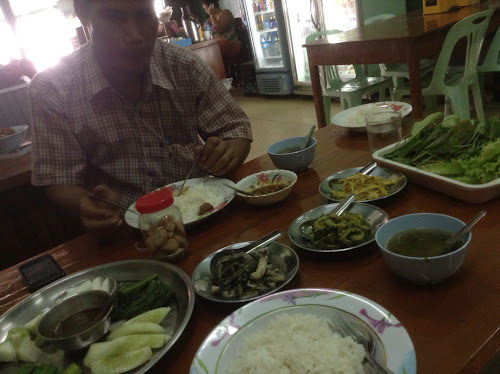 After lunch the trouble starts that turns this stimulating trip into a confusing and bittersweet adventure. Mike takes me into a room off the Main Street, through a curtain. The room is full of young men clustered around big flat video games with multiple players. Kind of shoot up games which I think they are gambling on. My presence is noticed but nobody is perturbed…until I take a couple of overall pictures. Suddenly Mike is by me, and a tough looking guy in a pit helmet with narrow mean eyes grabs his arm and takes him up a flight of stairs at the back of the room. I sense something has gone wrong. I feel uncomfortable. I edge out of the room and stand by the doorway. One of the players invites me to join, I indicate I’m just watching. Mike appears some minutes later no longer looking relaxed. The mean guy walks with him to the door, a scene develops as this guy looks at me madly and is obviously berating me. I do the usual hands raised in submission, humilty and apology, I’m just an ignorant foreigner. Mike walks me away from the place and around the block, under the bridge. He says this guy is Karen army and that they control the betting in these places. This guy had a gun and threatened Mike because of my photographic activities. I am aware that all this has not diffused. Mike is very bothered. I’m blaming myself, when perhaps Mike is blaming himself. I then gather that his wife, who I hadn’t met, is also in that place. Mike tells me he has to go and get her. I wait across the street. When he appears five minutes later he is with his wife who is hysterical and shouting and doesn’t acknowledge me. Is she mad at me? I decide I should return to Thailand now. There are other people now surrounding us as she carries on shouting and Mike is in heated debate with some other sympathetic guys. Apparently the mean Karen mafia guy assaulted his wife with a chair. He hit her! Mike speaks to the police, but what can they do? He says I should do something about his situation, but what does he mean and what can I do. On the bridge he engages the police, customs, immigration officials. They listen, but don’t act. None of them speak English. In the end Mike suggests that I report this. What does this entail? The guards get a blank piece of paper on which I write my name, date of birth and fathers name. Nothing will happen….pointless…….I have now seen how terrible things a in Burma. Organised crime, police are powerless, or corrupt, or turn a blind eye. The victims are the poor. The foreigner walks away back to his own better life.

Mike sees me through customs. I redeem my ticket to get back my passport. The genial customs official delightedly tells me that it is now possible to visit all of Burma. Something I know is not true. Not even the Burmese are free to travel throughout heir own country. On the bridge we exchange phone numbers. Mike had wanted me to buy a Burmese SIM card from the stall at customs. A cut price rate for foreigners. Unavailable to Burmese. The stall is closed. I give him 500 baht for his guidance and I cross back to Thailand in the strong sunlight. looking back I do not see the big slimy dog shit that I subsequently step in. Sums it all up nicely.

I feel relieved to be back in Thailand. This is a place I at least understand a little. Burma scared me.

On the way back to Mae Sot I call in at a large temple complex, Burmese style, novices playing that game like volleyball where you use a rattan ball and your feet. Workmen building a path to the reclining Buddha. The idiot sweeping up. Two monks smoking cheroots in the doorway to the mirrored Buddha hall.