I let Eyrique call the shots.

He chooses to go to the herbal sauna

Shower,wrap around sarong. Attendant brings tea. In the cubicle there is a tap to control the steam.

We meet a Canadian guy with perculiar pornographic tattoos and a long beard.

We go to have lunch at the khao soi bookshop restauarnt

Seems Eyrique has been taken for a ride, as his meeting is not happening……….

I drive him to the airport. We wander the small number of shops and have an expensive foot massage with some smiley fun women. The place run by an old made up Madame. Sabai, relax, my masseuse tells me. Why can t I?

Soaked to the skin riding back

Soaked again trying to check out the market.

Blat around on motorbike. Trade it for bike

The blog has taken a breathing space. It’s now 6 September, and is am now on the train at Chiangmai station waiting for departure. Chiangmai does weird things to me. The second time ive been here and the second time I’ve left feeling laid bare on one way or another. This time it is emotional. .

What was he trying to prove by anaylsing all my numbers. It tells him I’m very sensitive and also persistent. I would say I suffer because I’m on- committal.

I was learning about the world, but have found myself retreating back inside. I’ve lost my desire to eat. I’ve seen enough temples. I have had enough conversations. I feel like everything is collapsing inward. I can’t write this blog. I need an outlet through which to channel all this energy and tension.

A record for myself. The me who is fragmenting.

Wat Chedi Luang (a.k.a. Jedi Luang) was built in 1391 during the reign of King Saen Muang Ma, 8th ruler of the Mengrai dynasty. He intended the structure to house the ashes of his father, Ku Na. Appropriately, the site was designated as a ‘ku luang’ instead of a chedi since it was not intended to house relics of the Buddha.
The massive reliquary was expanded over the centuries, until it reached its final form in 1475, when King Tilokaraj made it the home of the Emerald Buddha, the most important cultural treasure in Thailand. At one point the reliquary–which had come to be known as a chedi–was 144 feet wide and 282 feet tall. Unfortunately, the pagoda was heavily damaged in the 1545 earthquake during the reign of Queen Mahadevi. The Emerald Buddha remained here for about six years after the earthquake, whereupon it was brought to Luang Prabang (in today’s Laos) by King Setthathirat, who ruled Chiang Mai for a short period in the years following the earthquake.
http://www.orientalarchitecture.com/thailand/chiangmai/wat-chedi-luang.php

Monk chat, but no monks.

Trying to work out what I want to do…. 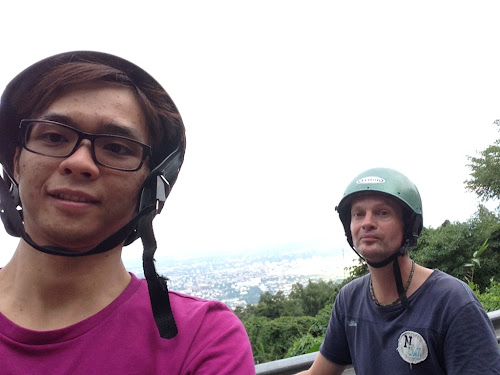 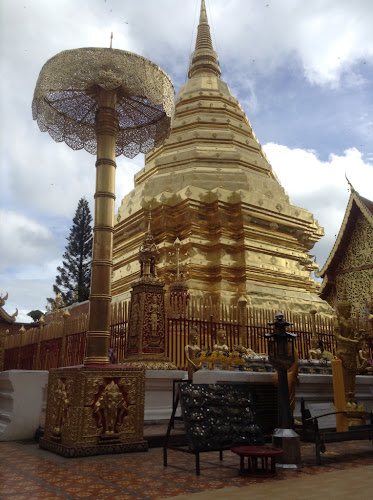 Windy mountainous road.temple full of rituals. I dedicate some tiles, I sign the yellow scarf. I shake a stick. I am to have a baby boy according to my stick…. 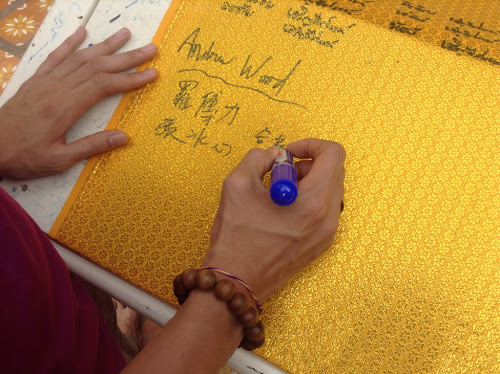 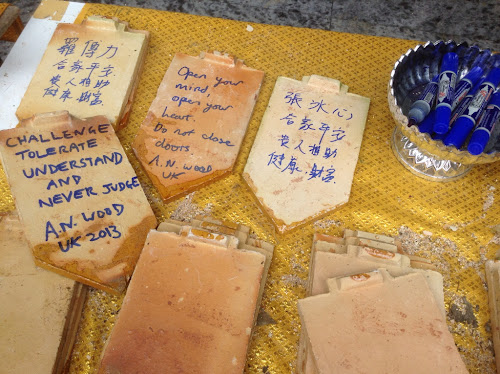 Stick a coin on the money wall

Inscribe the scarf to be wrapped around the chedi

Donate and inscribe a tile for the roof

Circle the chedi with lotus buds, incense and mantras 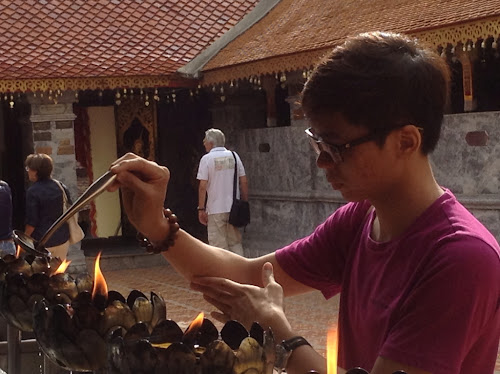 Have your picture taken by roving photographers holding garish samples: families smiling in front of chedi 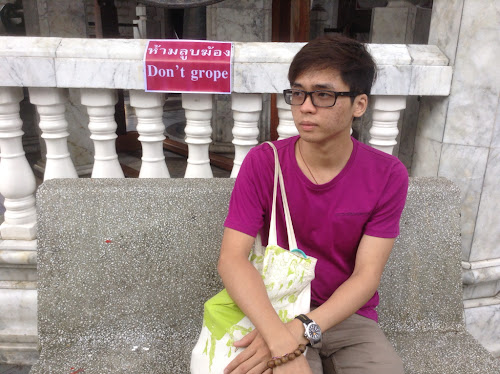 Group of army officers out for the afternoon

Hornet overpowering and devouring one.

Motorbike back, walk into the national park to a spot with pooling fast flowing water under an overhanging cliff. Eyrique does some yoga in the water. The light is beautiful. 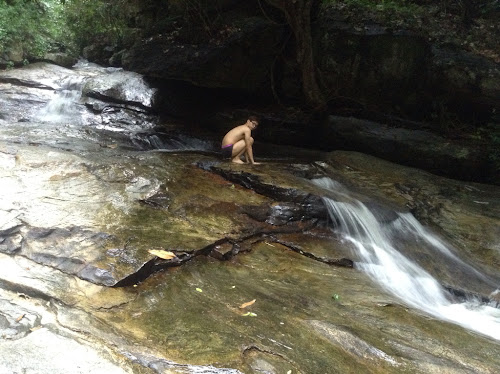 Back into town and buffet at gap. No other customers.

Back at riverside, a lot of introspection.

An uncomfortable evening at the night market.

Hectic search for hire bikes. The place next door is closed. We are up against it to get tp Kuhn chorn, but we make it. 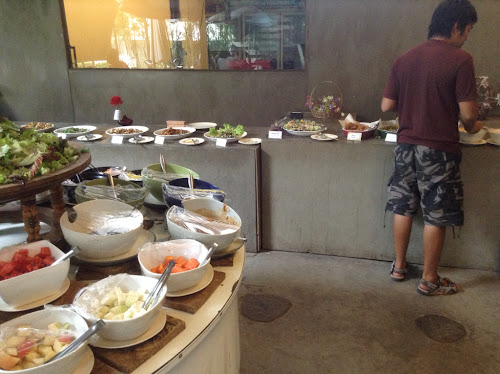 We take the wrong road to wat u mong, and my memory cannot reconstruct where we should be. In fact we are at the wrong temple

Wat umomg, 14th century, tunnels. A monk giving lessons to some young adults in the tunnel. Nice calm atmosphere on the square with the chedi.

On top of a 14 th century cave temple. The flat hill is crowned by a 40 metre chedi a brick wall marks out a kind of sanctuary. In the shade of. A bell house, guarded by four nagas. And under a tamarind tree gently arching down,30 cm long seed pods hanging down, black squirrels scampering in the high branches. 2 cockerels stru across the grass. A choir of monks chants drifting clearly upward, accompanied by a chorus of cockerels and squawking of birds. Little reddish brown and grey ones with white chests and a huge white plume and black beaks. They swoop to the ground where they pogo and bounce across. Some bounce back into the lower branches of the tamarind tree. A bell is struck. A solitary monk sits cross legged on the wall reading. The monks stop chanting. The birds stop squawking, a cavalcade of barking dogs takes over. Eric sleeps on the steps of the bell house. 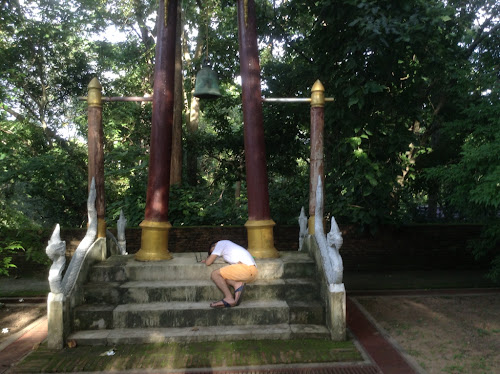 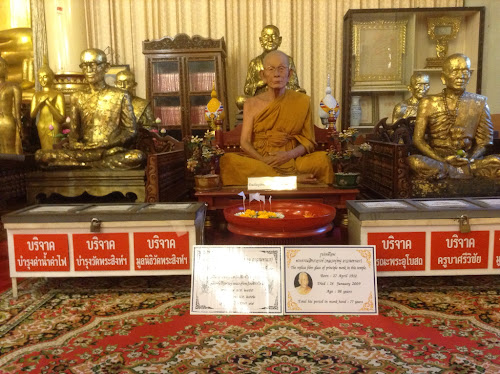 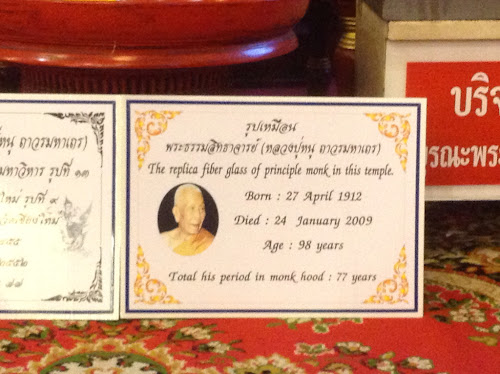 To wooden Lanna style one. Chanting and candles

2 kings square. Tribute open air concert.dead singer maybe? Candles and swirling lines of yellow jasmine flowers. A succession of folky acoustic songs, some wel known by the audience, sitting on. Rattan mats on the ground. Many cameras. Many intent live uploads. Eyrique videoing everything. Some puppeteers.

Rest for a while then walk……

Oven like heat of the afternoon. W meet analysis ex Muay Thai boxer who now lives in Australia. He attempts to persuade us to go trekking, buy a suit, go to a fight…. 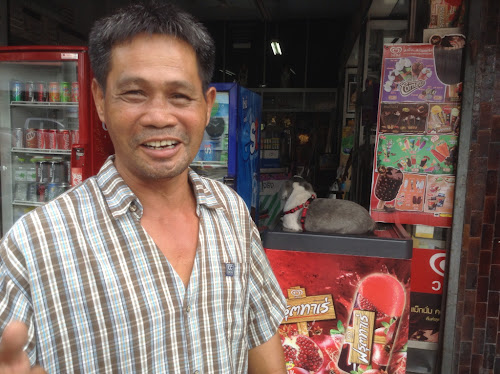 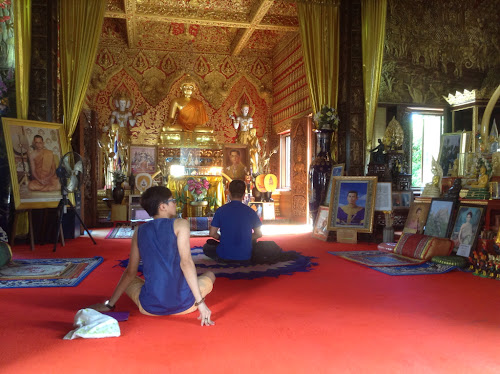 Taste of heaven veggie restauarnt: Poor service, Off off off, Bill is wrong….it gets a bad review from me on happy cows

More temples and chat in wat…..

Massageat a mother temple I’m so stiff. Buy some herbal remedies. Buy some conventional remedies, cos I’m getting a cold. In boots! Full of far ants with motorbike injuries and Thai women buying western cosmetics!

Over the street a aguy is training fighting beetles…i summise

Night market is snot a good plqce for food….in fact the food we have is poor and not at all spicy.again…..I’m disappointed

We check out the Gay bar, same old tired scene. Middle aged well to do faring with a boy each side. Quiet, low key, not very inspiring 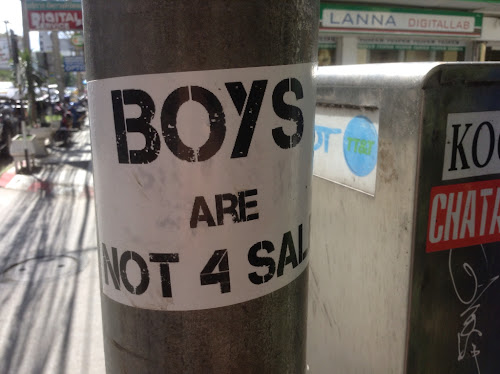 W go to the outdoor Bus. Bar next to the iron bridge by the guest house. the coloured lighting morphs from red to green to blue to purple. this is a spot where young thais gather at night to take photos of each other. the bar plays Guns n roses, for goodness sake…. We’re charged 20 baht for a bowl of ice…..

I load myself up with pills to sleep off my cold…….

Wat Phan Tao means “The Monastery of a Thousand Kilns”. According to the noted scholar Michael Freeman, this is probably due to the fact that the site was used for the casting of Buddha images intended for Wat Chedi Luang, which is adjacent to the monastery. The building was originally constructed not as a monastery, but as a royal palace building (ho kham) for the ruler of Chiang Mai, Chao Mahawong, who used the structure from 1846 to 1854. It originally stood on stilts, but these were removed when the building was refurbished as a monastery in 1876. Some traces of Chao Mahawong’s habitation can still be seen; for example, the front gable end is decorated with the image of a peacock standing over a sleeping dog. The dog is the zodiac symbol of Chao Mahawong’s birth year. The dog image is also present in the pediment of the left window on the front facade, though it is absent on the right side. 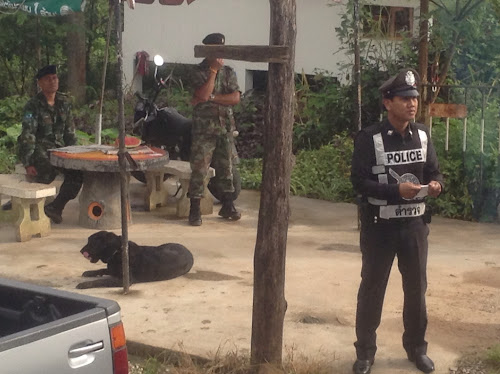 The bus journey was incident free,. Other than immigration police checkpoints, with police checking docs and dogs sniffing baggage, on the way out of tak province. My neighbour. For the entire journey was a large soldier who sat impassive, sunglasses on, playing kids games on his mobile, his body occupying as much space as possible in a very male way. I chat to a shaven headed ex-pat American who is. Building a house in pai.

Cm, riverside house has expanded and is not as homely as it was

The sun is baking, hotter than I remember it. The air is clear.

Teak Buddha temple. I discover my memory card is corrupted…have I lost all my pics….? Shit

Almost immediately I chance upon Michael!

Busking police,an in shades and helmet

Bushing blind man/ woman with mic and loudspeaker around neck

National anthem at 6 everyone stops in their tracks. At the end return to exchanging money,haggling, stirring food

A card reading fortune teller in the temple

I buy a replacement jade necklace

France’s, mike and I go to Reggae bar

A sit on the floor around low tables sleazy backpacker vibe.

We. Are easily the oldest there.

Pink flood and the eagles are playing