I thought cockerels only cocksdoodledoo at day break, not throughout the night. It makes it kind of confusing knowing when to wake up. As nature’s alarm clock is inaccurate I let my phone get me up. It is still dark and very very quiet as I tiptoe out of the hostel to climb 40 minutes to scenic spot 1 to await sunrise. The walk on a rug get stone path takes you out of the tiny village and over a couple of hills, each crowned by a new guest house under construction, with convenient unfinished concrete platforms abutting the hillside which serve as convenient viewing platforms. They remove the rural charm, but you have to accept that although the rice terraces is an ancient landscape it is also man made, and the locals inevitably are moving with the times, and tourism is a cash cow. I see Yao women  with stretched earlobes from which hang heavy silver ear rings, with bright blue or pink sm0cks, black skirt and leggings, brightly coloured dash round the waist, hair hidden under a black head scarf, brown weathered skin, breaking soil with hoes, selling bags of dried mushrooms, or carrying tourists’ luggage in round baskets strapped to their backs. The men are more conventionally dressed with no obvious ethnic dress. The construction workers sleep in the structures they are working on. Bags of cement are transported up the mountain by horses. It’s a miracle that there is so much development in such a place so inaccessible by road.

The sunrise was wonderful. More pictures will appear here in time.

It's almost all over for another year. Waiting at Doha airport where the food options are poor and expensive, and don't make up for the disappointing meals on the first of my 2 flights.

As per usual it's a long journey home. I got up early and watched the sun rise in Prachuap, a cycle along the seafront. Already getting very hot. Then hanging around, my mind having already left the building. I don't want to leave. This was a place that felt very homely and was populated by similar souls wanting to be off the beaten track.

The four hour mini bus ride is actually 6, mainly due to the unbelievably congested sprawl of bkk. It doesn't leave me much time to do my planned shopping in mbk, and getting to suvarmabhumi is a rush.

The weather in brighton is 7 degrees. Looking forward to just one thing: my bed and not having no reason to stir from it!

I’m not sleeping too well here, maybe the thin walls.

I dreamt about the Lovegrove brothers. Not a nice dream. Mat had inadvertently killed Luke, having administered forced water consumption via hosepipe then stood on his stomach. He dies later, mat unaware of that, from split gut. This has all been brought on by the pow drawings of Japanese torture at the jeath museum.

The sunrise is muted. There are veils of mist across the lake. A teenager is performing for the thai tourists. Climbing the legs of the bridge, beaming and waving, then wavering at the top, counting down neung song saam. The Bangkok tourist women in their bling, big sunglasses, large bright trousers and makeup egging him on. He plunges, resurfaces, swims to the pontoon bridge and collects handfuls of green 20 baht notes.

The schoolboy is carrying 2 bags of small fish with whiskers and river snakes yoked on a pole across his shoulders. I see the same people each day. On the first day he was dressed in a Boy Scout school uniform, the second another kind of uniform of yellow polo shirt and long black tracksuit trousers. Today it’s a red and white check polo with a red cotton longyi. I think, though I could be wrong, different uniforms for different school days. His mother is as usual at the Mon end of the bridge selling bags of eels. 15m away is the other mon eel and fish seller with her wide straw hat, yellow ash face. She always says hello to me. In the evening she usually suckles her baby at the breast there. The man with the gold tooth and camouflage jacket and blue cap is on the pontoon caling out boat rides. He knows me too and laughs when he sees me. He was unsuccessful in getting my fare yesterday, and when I returned from my cut price trip to the drowned temple he was still there waiting for custom.

Today I bought a bag of little fish. Inside is some kind of coloured powder solids also. I walk the pontoon looking for a calm pool of water between the bamboo cross struts into which to release the fish. This is some kind of Buddhist ritual. They do this with little birds in Malaysia and Indonesia. Releasing the creatures, I guess, is away to make merit. I contemplate my little fish before releasing them and wonder if they are in a perpetual cycle of being caught by the mon woman, bagged, sold, released and then caught again. What kind of spiritual release does that bring them?

The odd group of Amber monks wander across the mon bridge with their silver food bowls, as big as tom-toms.

Quite a chilly sleep, thankfully the karaoke on the other side of the creek stopped by 11.

I'm quite excited to get up for sunrise over the lake. Monks on the bindi baht are crossing the bridge. Long tail drivers are prepping their boats and cruising out into the golden water. A schoolboy dressed in Boy Scout type uniform is with his mother selling little fish in bags of water, to be released for merit making. I guess that's his job before school. I forget how early it is. 6 am? 7 am? The village is getting up. Mon women with yellow ash daubed faces with baskets balanced on their heads are selling tea and snacks. Across another small bridge, under which locals are tilling their vegetable gardens, I'm now in a more rustic environment of typical mon houses, bamboo platforms with thin woven walls. There are a lot of women with babies. At a store I drink some water and a guy on a motorbike generously offers to take me to the wat. It's burmese and very ornate. On the land next to it is a campsite. Tents for monks. There is a road which is strewn with dry leaves, rustling in the cooling breeze. This leads to a gilded stupa, next to which is a souvenir market. Here I see a small group of monks committing taboos: handling money, smoking, shouting to each other. Buying food and ice creams…I understood their food was from donations. In the road a small mangey pup has just died. A pack of adult equally scrawny and few ridden dogs aggressively police the small corpse. 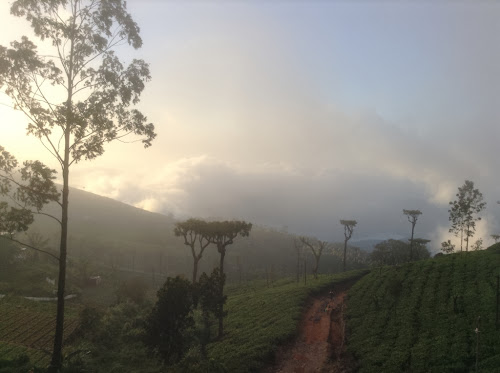 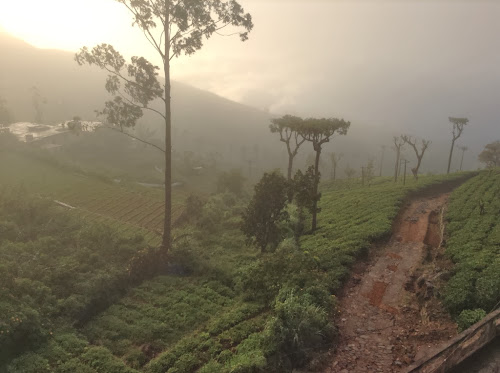 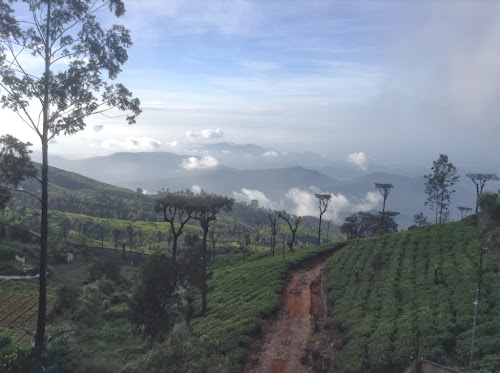 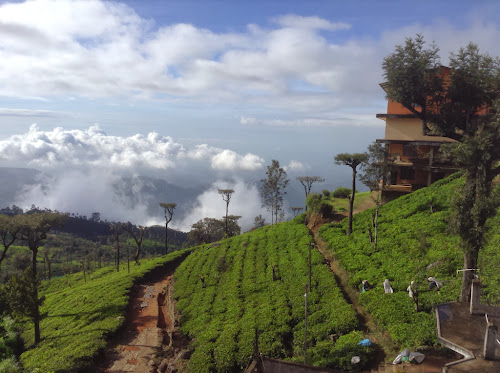